If you look up Emprise in the Merriam-Webster dictionary you will see that it means “an adventurous or daring enterprise.”   That pretty much describes the Emprise product family’s launch 2 years ago.  We did something that no one else was, or is doing today.  Imagine being able to start from scratch on a storage solution, and I’m not talking about controller software.  I’m talking a complete re-engineering/architecting a solution that is built with enough resiliencies to offer the only zero-cost 5-year hardware warranty in the storage industry.  Not only is it super reliable, but it’s ridiculously fast and predictable.  When you can support 600+ Virtual Desktop (Performance VDI) “bootstorm” instances at a whopping 20 IOPS per bootup in 3U of space, I would classify that as wicked fast!!! 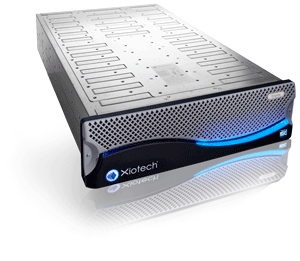 In those 2 years we have not sat around on our laurels.  Steve Sicola’s team, headed up by our VP of Technology David “Gus” Gustavsson, has really outdone themselves with our latest Emprise product launch.  Not only did we move our entire user interface from “Web Services” to a RESTful API (ISE-Manager (blog about this later) and our iPhone/iPad App), he also released our 20(ea) 2.5” disk drive DataPac which has 40(ea) 2.5” drives in 3U of space for about 19.2TB’s space and a TON of performance.  His team also released our ISE Analyzer (advanced reporting solution built on our CoreteX/RESTful API (www.CorteXdeveloper.com )– I’ll blog about that soon) and our next release of our Emprise product family, the Emprise 9000.  I swear his team doesn’t sleep!!!

So, the Emprise 9000 is a pretty unique solution in the market.  Today, when you think “scale out” architecture the first thing you might think about is NAS.  Hopefully our ISE NAS !!  We hope moving forward you will also think of our Emprise 9000.  The Emprise 9000’s ability to scale to 12 controllers puts it way above the 8 controllers the 3PAR solution scales to and above the 2-controllers the rest of the storage world produces (EMC Clariion, Compellent, HP EVA, IBM XIV etc).  When married with our Intelligent Storage Element (ISE) it truly gives our customers the most robust, scalable solution in the storage market today. 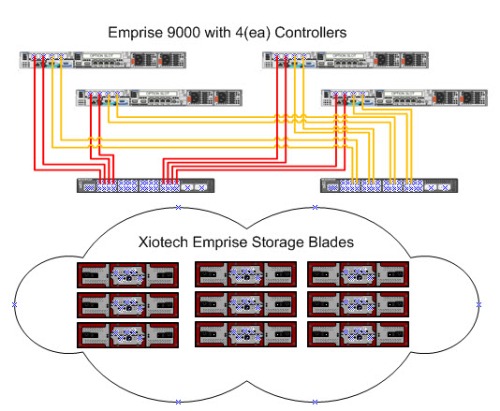 Let’s be clear, the Emprise 9000 is not just a controller update.  It’s a combination of better, faster controllers, RESTful API and our ISE technology combined to solve performance starved applications issues like Virtual Desktops, Exchange, OLTP, Data Warehouse, Virtual Servers as well as various other types of applications found in datacenters today.  The ability to give predictable performance whether the solution is 10% utilized, or 97% utilized is a very unique feature.  Did I mention it comes with our free zero-cost hardware maintenance?  24x7x365 !!!

So for those keeping a tally at home, and for those competitors that want a little more information on what the Emprise 9000 can do, here is a quick list: (this is not all the features)

So, as you can see it’s a pretty impressive list!!  And as with all new products, we will be adding new features pretty quickly so stay tuned to announcements from us around the 9000.  BUT there’s more!!  But I can’t really go into it today 🙂  Just stick around a couple of months for some even cooler stuff Gus’s team will be rolling out.   I just got back from a week in Vegas getting feed by a firehose about all the stuff we will be rolling out by the end of the year.  WOW !!  Impressive to say the least !!! 🙂

This entry was posted in Uncategorized. Bookmark the permalink.